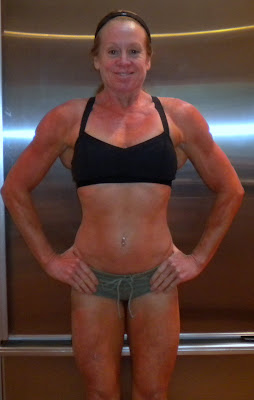 I'm cured! Those are the exact words Dr. Leahy used after three ART sessions. Yahoo! Previously I wrote about Active Release Technique, and now I will explain what I went through.


I first visited Dr. Leahy and explained my issues, I have very tight hip flexors and I have an anterior pelvic tilt, probably due to tight hip flexors. It was aesthetically unpleasing and probably causing me issues with quad development. In addition, this can be a cause lower back pain.

I also had issues with lack of dorsiflexion and this was causing me problems with squatting and perhaps calve development.

Dr. Leahy had me stand and looked at me from the side, he could see the "sway back". He had me squat and immediately saw the ankle mobility issue and said that really needed to be addressed first.

Onto the table and he played with my feet. It didn't hurt at all. Onto my stomach and he worked on my glutes, specifically these areas:

Then onto my back and these areas:


The final was the psoas, this was the hip flexor area that was causing the issues.


It took about 10 minutes and he said I would need to come back three more times probably, all within the next two weeks. The next day my left shin was fairly sore, the muscle running up it all the way to the knee was tender.


I saw Roy and it was squat day, I could go right down to the floor with ease. Roy said he could tell by watching me walk, everything moved with ease, I wasn't stiff or tight anywhere.


When I saw Dr. Leahy two days after the first appointment we talked about the tenderness of the shin, he said it was due to the increased range of motion.


At the second appointment he said I held onto quite a bit of the treatment, my pelvis was in a better position.


I felt great after the treatment and particularly after the second one. The third treatment he announced that he liked the curve of my back, it was perfect and normal. He performed the treatment on my psoas and talus (ankles) and said I should cancel the fourth appointment, there was no need for it.


I asked when I should come back, and his response? "You're an athlete, you will know when and if you need to return."


Will I go back? You bet, if I need to! Did my insurance cover it? No, they did not. I have an HMO and they do not cover this treatment, but I am worth the investment.


Here is a video to give you an idea of what might be done in an ART session for the psoas. You can watch the entire video, but my treatment consisted of what is shown starting at minutes 3:37. (Email readers will need to navigate directly to the blog to view this video)

Check out my about.me profile!

Promote Your Page Too